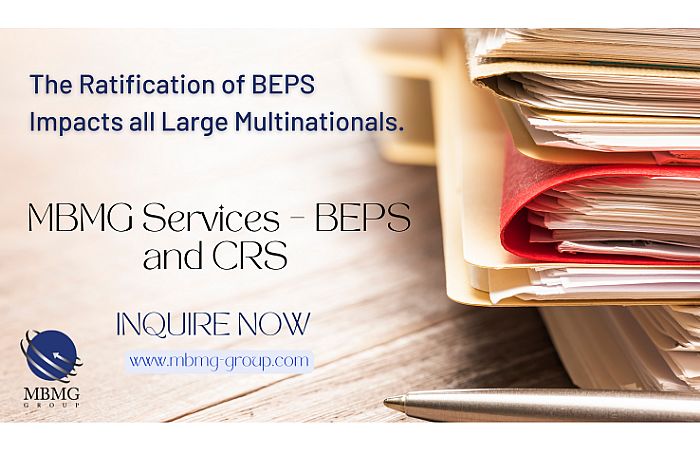 The Ratification of BEPS - Impacts all large multinationals.

Three months ago, Thailand submitted to the Organization for Economic Cooperation and Development ("OECD") its notification of ratification of the Base Erosion and Profit Sharing treaty convention (known as BEPS). This is a European anti-tax avoidance treaty that targets multi-nationals, and its effectiveness relies on as many nations as possible ratifying and implementing the rules of the treaty which will better define where Permanent Establishment (PE) exists.

In simplified terms, BEPS intends to severely reduce the scope of multinational price transferring of taxable income which can take place between entities of the same ‘group’ being held or operating across borders. Multinational might, for example, shift sales to a lower tax jurisdiction by booking sales from an entity there, when most of the sales are taking place outside of that country.

Another case might be when too much profit is being booked one part of the business model at the expense of another, such as increasing the margin for distributor in a lower taxed jurisdiction while the manufacturing arm in a higher tax jurisdiction makes a loss.

This ratification of the BEPS will took effect" from 01st July 2022, and will have potentially critical implications for multinationals that have or are looking to invest in Thailand or Thai companies planning to invest abroad. Ratification and implementation of BEPS is part of Thailand's tax treaty-related measures and commitments under the OECD BEPS initiative.

It largely is related to the avoidance of permanent establishment (PE) rules that might be unfavourable to an entity. This has become somewhat difficult to do in even without BEPS as Thailand, like many other countries, has also adopted price transferring legislation. But As PE relates to the Double Taxation Agreements (DTA’s) it has until now been these agreements that define where a company’s jurisdiction is for the purpose of paying tax, however, most of these agreements were signed decades ago and before multinationals became more sophisticated at tax avoidance.

The BEPS treaty effectively modifies these existing DTA’s in one swoop and saves Thailand from having to renegotiate its DTA with each country. Tax advisor in Thailand will now need to consider not only an applicable DTA but also BEPS for large enterprise before concluding on PE.

BEPS is related to the Common Reporting Standards (CRS) as this is also an anti-tax avoidance measure introduced by the OECD and MBMG has been on top of this for the past four years.

We have assisted several clients during this time on the relevance of CRS with our ‘CRS Health-Check’.

For most people, unless you have a company large enough in turnover to trigger price transferring legislation, then CRS is likely to be the main protocol impacting your arrangements. In the first instance, it would be necessary to understand how your personal bank account(s) and/or company are structured in a way that would render them reportable. There is no minimum amount for CRS reporting.

CRS concerns the reporting of end year bank accounts of Thai tax residents to the Thai revenue department. The Revenue Department plans to be able to see this data when you file your annual tax submission. Should they suspect that money has been brought into Thailand, then you may need to pay income tax on this amount.

MBMG provides a range of services related to both BEPS and CRS from individuals with income from overseas, to advising on Family Office functions such as the reporting of overseas bank accounts of Thai tax resident shareholders and directors to PE reviews for overseas entities operating in Thailand, and Thai entities selling its products in another jurisdiction.

We have been reviewing Thailand’s DTA’s and price transferring issues for over two decades.

For more information and to speak with our advisor, please contact us at