Mr. Carlos Martinez, Director of Valuation and Advisory, Knight Frank Thailand said, foreign visitors contributed to just about 90% of Phuket’s tourism receipts before the pandemic. Thus, it is not surprising that demand for hotel rooms collapsed after the closure of the airport for international arrivals enforced by the Thai government in 2020, followed by the travel restrictions to foreign arrivals, including a 14-day quarantine period. Only about 700 international arrivals were recorded during the first half of 2021, a decline of 99.9% YoY. After this lengthy lack of foreign visitors, several hotels remained partly, or fully closed.

In recent years, the tourist market has partly shifted from seasonal Europeans towards mass markets from China, the current largest feeder market, and Russia. During 1H 2021, China maintained the ban on outbound tours, imposed since January 2020, due to virus risk. Due to the high reliance on Chinese visitors, the Phuket ‘sandbox’ re-opening program starting in July might result in a less-than-forecasted number of foreign arrivals. This pilot program is the first attempt to re-open Thailand, in which inoculated foreign visitors will not require 14-day quarantine stay in a monitored hotel room. 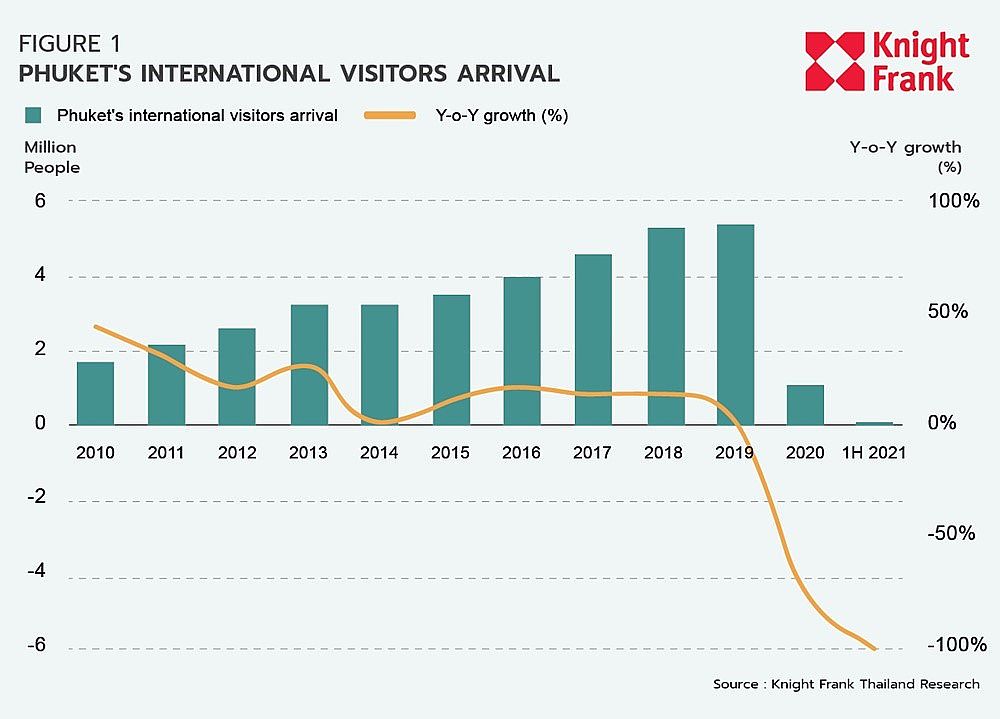 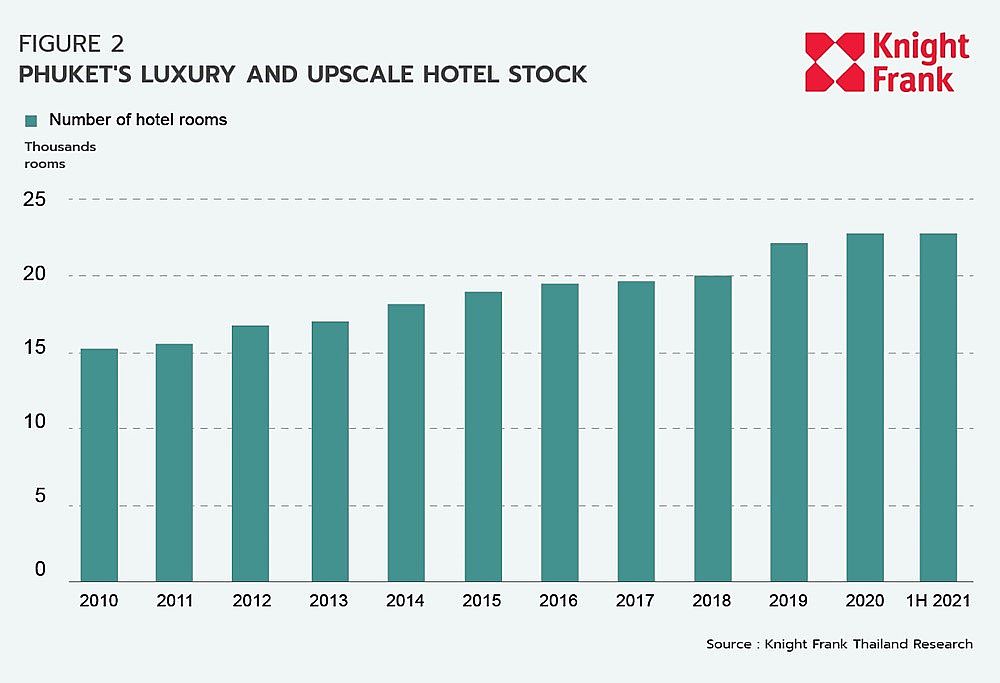 Without foreign visitor arrivals, the demand for hotel accommodation plummeted as reflected by the occupancy rate at 8% for luxury and upscale hotels, a drop of 30 percentage points YOY. The lowest average occupancy rates were recorded at 3% in May and June due to the third wave of Covid-19 infections that emerged in Samut Prakarn in April 2021.

The average daily rate (ADR) of luxury and upscale hotels plunged 39% YoY to THB 2,342, a new record low. As Phuket is not a popular resort destination for the domestic market, hotels offered aggressively discounted room rates to compete for limited demand.

No new hotels opened in the luxury and upscale segment in 1H 2021, thus the total cumulative supply remained unchanged at 22,824 hotel rooms in Phuket. Over twenty new hotels were planned to open in Phuket between 2020-21, however, given the current uncertainty on the tourist recovery, these projects delayed their openings to the second half of 2021 and 2022.

V Villas Phuket by MGallery (24 rooms) in the super-luxury segment opened in Phuket in the first half of the year. 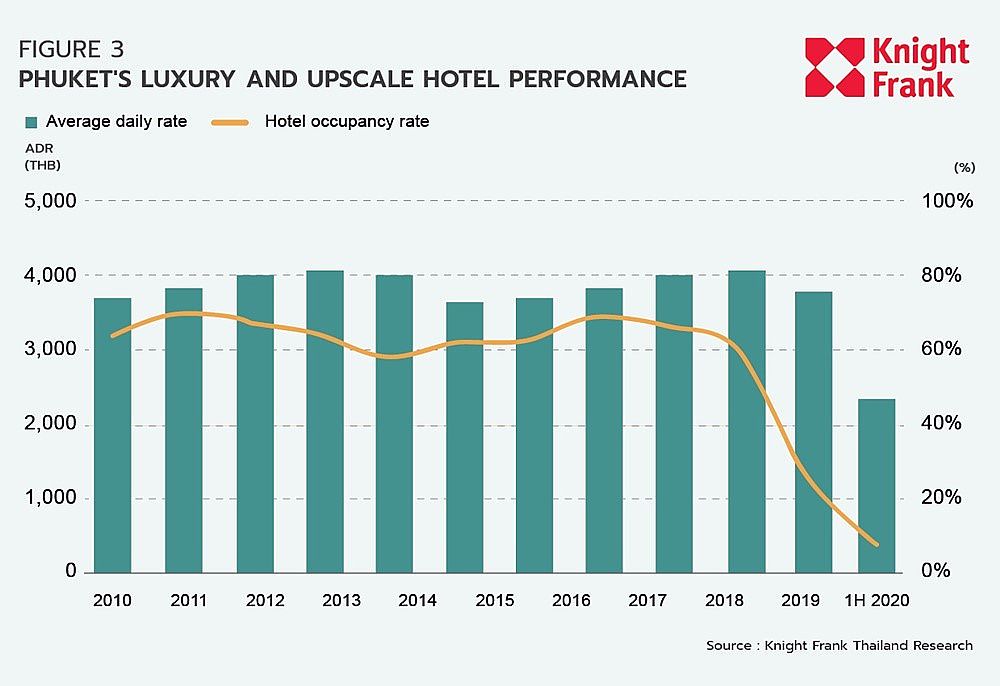 The number of international visitor arrivals continued at a record low because of the strict entry quarantine regulations implemented since the Covid-19 outbreak in 2020.

The Thai government targeted providing 100 million doses to 70% of its residents by the end of 2021 before a wide reopening to foreign visitors. To achieve this objective, the pace of vaccine rollout must speed up as only about 3% of the population had been inoculated by end of June 2021. Yet, up to 60% of the population in the province of Phuket received at least one shot, the highest rate in Thailand, as they prepared to reopen for vaccinated visitors who would not require the present mandatory two-week quarantine under the ‘sandbox scheme’ starting in July 2021. However, visitors are subject to other requirements such as staying at specific hotels with SHA+ certification and conducting several RT-PCR tests before and after arrival in Phuket.

The Phuket “Sandbox” is a pilot program, an attempt to gradually reopen Thailand to foreign tourists that might be expanded to other tourist destinations if proves successful. The risk lies in an additional wave of infections that could bring back strict travel restrictions postponing the recovery of the tourism sector.

Still, hotel operators are cautiously hoping to see the beginning of tourism recovery in the second half of 2021 with double-digit occupancy rates. Yet, Thai authorities forecast only 100,000 visitors under the sandbox scheme in the third quarter of 2021. Thus, we do not expect the average occupancy rate for luxury and upscale hotels in Phuket to rise significantly and probably continue at levels below 20%.

Similarly, the average ADR will also continue at low levels for the remainder of this year and probably beyond, as the existing hotels compete for a reduced number of travelers, new hotels that were delayed or postponed progressively start operations, and more destinations reopen in Thailand.

The success of the control of the pandemic in Thailand, with relatively low infection rates, will give confidence to international visitors that are expected to increase gradually under the ‘sandbox’ program in Phuket, especially from those markets with widespread vaccination coverage.