Getting Serious in the Sixties

It was during the early to mid '60s that the Chamber began to take a serious look at the role it played in the commercial community as a representative body. Sub-committees were set up on an adhoc basis to investigate and monitor particular aspects of expatriate living and commercial operations. Previous attempts at establishing the living costs for expatriates as a guide for companies employing foreign personnel were now starting to be updated. Long-standing business problems such as the awful congestion at the Bangkok Port were pursued with greater vigour. The much-discussed Alien Business Law, initially intended to control the activities of the inundation of immigrants from troubled neighbouring counties but later expanded to cover all foreign business interests in Thailand, was a genuine cause for concern and was a rallying point behind which the Chamber became a focus for the British commercial community. In 1963 the proposal to set up a monthly bulletin was first raised, to contain Chamber circulars, trade enquiry lists, a monthly economic report and news and new ideas, as well as listing the services offered by the British Embassy Commercial Section, the first inkling of what was to become one of the most popular informative services of the modern-day Chamber.

The Chamber got serious in the mid-'60s by appointing ad hoc sub-committees; prior to this action was taken by a senior Thai in your company approaching a friend, the Minister. - Alistair Greenlees

From the monthly meeting minutes, February 1964: On the suggestion to turn the monthly luncheons into "business luncheons like those of the American Chamber" it was felt that "this would spoil the informality enjoyed at present and deprive members of the opportunity to swap business gossip." 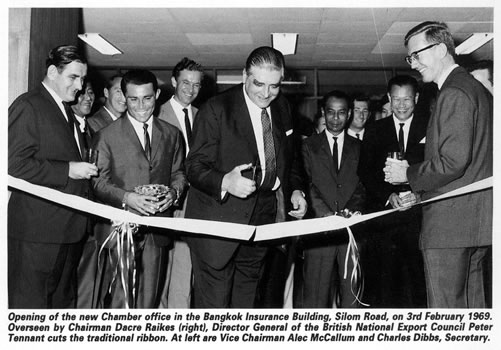 The Chambers of Commerce Act of 1966 was to have far-reaching effects on the British Chamber. Ostensibly, the Act was introduced to bring all trade organizations under the aegis of the Board of Trade of Thailand, with all such chairmen given a seat on the Board. This provided for the first time an official channel to government for the foreign chambers, as issues affecting the foreign commercial community could be raised and discussed with other chambers including the Thai Chamber of Commerce. Other points of the new law made it impossible for a juristic body to serve as Secretary, therefore the Borneo Company had to resign and, in the first instance, Alastair Greenlees (of the Borneo Company) was appointed Secretary as the 'named person' required by law.

Board of Trade meetings were ridiculous - there was this farang presiding over multi-millionaire Chinese businessmen, so I just sat back and allowed my aura to spread around the room - with our business usually discussed in private with Khun Suriyon (then President of the BoT) after the meeting. - Dacre Raikes (when Deputy President of the Board of Trade of Thailand, 1967-9)

With the increased activity of the Chamber and the enforced resignation of the Borneo Company as Secretary, it was felt that there was too much administration for a volunteer working fulltime in a commercial capacity, hence in 1969 the Chamber opened its first office, in the Bangkok Insurance Building in Silom Road, employing three staff. Charles Dibbs was appointed the first permanent Secretary on a salary of Baht 5,000 per month.

Board of Trade meetings were great fun, we all got very drunk! They were mostly interested in commodity prices, and exporters dominated. It was all in Thai, so we raised our points over a brandy with the chairman after the meetings. It didn't achieve an awful lot then but it gave us a voice. - Alistair Greenlees

Quarterly subscriptions were initially raised to cover the cost of the move and the increased overheads, but as more companies joined the Chamber due to its increased profile as well as improved services and representation, these dues were in time reduced to previous levels and still comfortably covered costs.

During my time as Chairman we accepted the services of the British Executive Services Overseas, aka the "old fogies", and Ron Whitehead came over to establish a set of rules and regulations for the Chamber. - Dacre Raikes